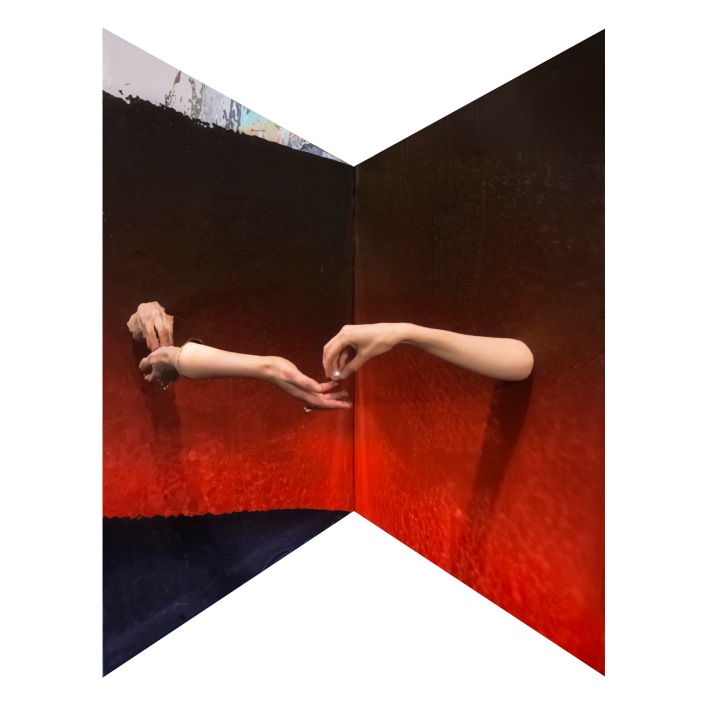 Everything is brown, not the brown of a muddy landscape or a sepia-toned photograph, but the even, pale brown of a piece of MDF. The ground is totally flat, giving the impression that the four castles that comprise the landscape rest on a cutting board.

Moving close to one of the structures, it’s not totally clear that it is a building more less a castle, perhaps it is a more like a rollercoaster at an old fashioned amusement park. It is made of two large parts, a giant upright gear sandwiched between two upside down T’s, and an equally large spiral which shoots out perpendicular to the gear at its top and circles down till the smallest spiral connects back to the bottom of the gear. A drop of milk moves along the spiral but it leaves no trace of moisture behind. When it reaches the bottom it slides onto one of the groves of the gear and rolls back up to the top.

“Why do you always get to have clean hands?”

The next structure is a tall thin rectangle suspended between two triangular frames. Along the midline of the rectangle snakes a line of open space, like a squiggle drawn across a page. In the grove of this line runs a blue tear, when it falls to the bottom with a clang the rectangle quivers and suddenly flips, and the tear starts on its downward path again from the top.

“I don’t feel like it, but that shouldn’t stop you.”

In another construction a wheel spins alongside of a shoot that juts out several times the width of the wheel and then returns again and back in a zigzag. The wheel is solid except for one circular hole by its edge; when the circle aligns with the shoot a drop of blood, or maybe it’s a ruby, springs out and rolls down the shoot, moving away from the wheel and returning, away and back again. It reaches the bottom as the wheel completes one turn; the hole accepts the red jewel and rolls it back up to the top.

“How am I supposed to be vulnerable when you are always attacking me?”

“I’ve been here the whole time waiting for you.”

Each edifice produces a dull hum, like a room full of refrigerators each cooling a single fruit. There is no clinamen in this world and no encounter, just dragons polishing their treasure. Underground is a blinding light invisible from above, but the ground is too solid to dig and so the sky is without color.

http://thevoider.wordpress.com/
View all posts by Voider →